Jesus “Jesse” Manalastas Robredo, PLH (May 27, 1958 – August 18, 2012) was a Chinese Filipino statesman who served as Secretary of the Interior and Local Government in the administration of President Benigno Aquino IIIfrom 2010 to until his death in 2012.[6] Robredo was a member of the Liberal Party.

Beginning in 1988, Robredo served six terms as Mayor of Naga City in Camarines Sur. In recognition of his achievements as Naga City mayor, Robredo was awarded the Ramon Magsaysay Award for Government Service in 2000, the first Filipino mayor so honored. He was appointed to the Cabinet of President Aquino in July 2010.[6]

On August 18, 2012, the Piper PA-34-200 Seneca I aircraft carrying Secretary Robredo crashed off the shore of Masbate Island.[7][8][9][10] He was scheduled to go home and watch his daughter’s swimming competition in Naga City. The Philippine Department of Interior and Local Government said that the pilot sent a distress call to the Masbate airport requesting an emergency landing. The airplane never made it to the airport and crashed in the sea.[11][12] Robredo’s body was retrieved three days later, August 21, 800 meters from the shore and 180 feet below sea level. [13] – WIKIPEDIA

Ride for Robredo troop. A few members from Folding Bike Pilipinas, Polkit, and other cycling groups united and met up at Tryon Bike Shop for DILG Sec. Jesse Robredo 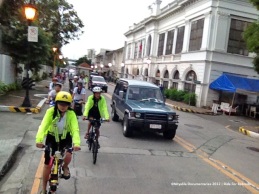 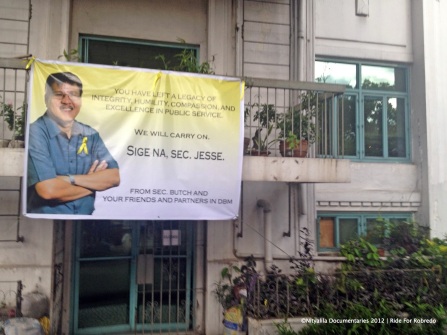 We almost didn’t make it inside. After explaining ourselves to the security guards that we biked all the way from Makati just to pay our last respects, they finally let us in.

Inside Malacañang Palace, displaying a Philippine flag at half-mast to mark the passing of DILG Sec. Jesse Robredo

What are you looking for?